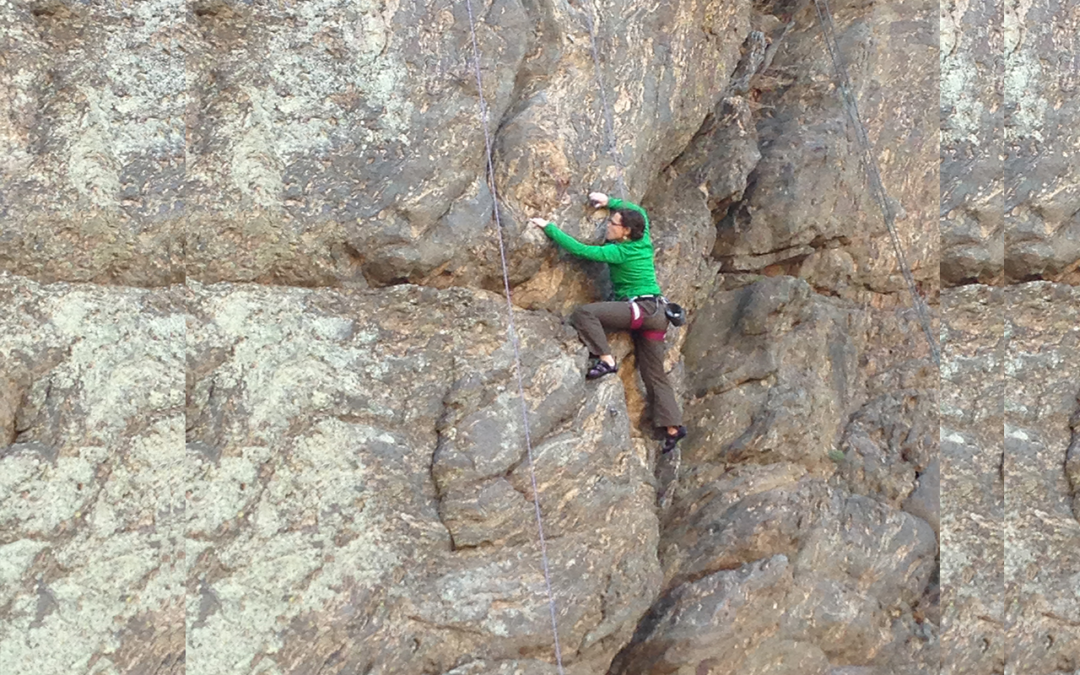 I met with Beth Chronister last July to ask about her journey to and experience in ministry. I invited her to choose the spot for our interview. As she is an accomplished rock climber, I feared that she would ask me to put on a harness and meet her at Boulder Canyon! But God is good and Chronister is wise. She must have known I was in no shape to climb. Also, she just loves being outside. We met amidst the sounds of children playing, and the sight of lush climbing green vines under a gazebo at the Denver Botanic Gardens.

When you see Chronister, her presence is strong and tall like an oak tree but she stands only about 5’3″ in height.  Her gentle voice moves seemingly insurmountable mountains. She has marched in countless protests for people pushed to the margins of society. She has organized meetings and vigils with and for people from (but not limited to) the Sik, Muslim, Jewish, Christian, Transgender, Gay, Lesbian, Bisexual, Native American, Latino, Hispanic, and African-American communities. She also resourced education for her UU (‘Unitarian Universalist’) congregation to learn about immigration and discern whether they would participate in the New Sanctuary Movement. When the church voted to become a New Sanctuary congregation, they sheltered Arturo Hernandez Garcia, an undocumented immigrant. Hernandez Garcia found sanctuary in and community with this church for 10 months while his deportation case was being considered. It was clear to me that Chronister is constantly seeking justice and loving kindness. This made me curious to know more about her.

I  asked Chronister how she was initially drawn to ministry.

I grew up UU in Topeka, Kansas and I had this fervor for social justice. I grew up very involved in my home congregation. My congregation was passionate about social justice. I remember, starting around middle school, all of the Baby Boomer activists who raised me would hand me buttons with Gandhi and quotes from MLK on them and say, “you are the future Elizabeth. We believe in you and expect you to do these things.”

She received their words as both encouraging and as a call to action.

This resulted in Chronister being involved in ministry from her youth. In church, she led youth worship. She started  the first Gay-Straight Alliance in her high school, while she was still a high school student. After undergrad, she went on to earn an MSW in order to be involved in lobbying and advocacy.

The idea of being a social worker at 22 was rightfully terrifying. So I did Peace Corps.

It was during Peace Corps in Paraguay, South America that Chronister received her call to ministry. Even though she was working with a community of 500 people in Peace Corps, she found herself having huge moments of silence.

I had silence for the first time in my life.

That silence was at times so generous and gave me this little, safe space to grow and to question and to reflect and be with myself. Sometimes the silence was so loud and hard and lonely and confusing but I had it.

I asked Chronister if she found any answers to those big questions.

I remember I was writing in my journal and it was raining outside. It was pouring buckets and buckets. I was feeling transformed by the community I was within because they were interdependent. They worked together for the betterment of future generations. This was a passion that tied them together even through conflict. I felt so transformed by this. I am writing about who I am and this experience in community. It just kind of flowed out on to the page as ministry.

This was a pivotal moment for Chronister.

I remember putting down my pen and pushing back my chair and then pushing my journal to the farthest corner of my house. I didn’t live in a big house. I went out to my porch. I remember watching the rain, coming down on me and breathing really deeply. It was this sense of coming into true with myself like nothing I’d ever experienced before.

Chronister then contacted the ministers from her youth to inquire further about this calling to ministry. She was disappointed to find out that it would be another four years of schooling before she would be eligible to begin ordination. Undaunted, she began to look for theological schools.

How did Chronister end up at Iliff?

I didn’t anticipate Iliff which is one of the things I loved about it. I remember coming and visiting and thinking to myself, I don’t really get this whole seminary thing and I don’t really know about this whole Methodist school thing. But it seems like it’s a nice place that is going to ask me to grow and support me in that growth and I really want to be near those mountains that I see outside the library window.

I asked Chronister whether Iliff was worth the leap.

What I found at Iliff surprised me. I didn’t anticipate how deep my relationships were going to be with fellow seminarians who were also experiencing lots of change. I didn’t understand the passion of the professors in supporting students and being there to accompany so many people through their process and their understanding of the nuances pastorally, intellectually and emotionally of those changes. I didn’t anticipate how big the questions were going to be and that I was going to share so many questions in this interfaith context.

How did Chronister feel being a UU at Iliff?

I came in and I had a lot of boundaries and a lot of barriers about I’m a Unitarian U going through a Christian seminary so my experience is going to be different.

She discovered that it was different in certain ways.

There were definitely certain things in our theology classes where I would say, ‘this isn’t our crux. We have other cruxes. [But] this isn’t the [issue] that changes everything. It’s not our fulcrum point but we have others that are ours.

Overall, Chronister describes feeling supported as a UU at Iliff.

I felt like a lot of people tried to go out of their way to ask questions and understand. I appreciate the effort that I feel Iliff as an institution and Iliff as a community puts forth to understand difference, and the recognizing that we’re going to get it wrong sometimes but that we can always come back, if we trust each other. I felt like I trusted Iliff.

Chronister has a unique perspective on the significance of difference. At one point in the interview she showed me a ring she was wearing, made by Navajo artist, Bet Lee.

It is my theological statement that I wear with me. The two turquoises next to each other say that when I meet you and you meet me and we are able to witness and honor the ways that we are different, while also witnessing and celebrating the way that we are connected in the same, there is God or there is Spirit. I think my wish for the world would be something like that on a much larger scale because we are at the risk of losing our differences in the flattening of our world and that is such a loss in our language and in our texture as human beings. But I also believe that if we don’t start finding and relating to the commonalities that is within pain and suffering and living and dying and being a part of a family to be able to relate with people who are different from ourselves through empathy and boundaries as well, then I fear what would come next.