Alum Gretchen Haley Sees Ministry as a Leap of Faith 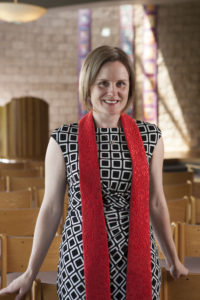 Donning a delicately hand-crafted red lace stole, alumnae pastor Gretchen Haley (Master of Divinity, 2011) explains how she identifies with a metaphor one of her skydiving congregants taught her.

“When you’re up in the air and ready to jump, you have a choice about how you will let it affect you: You can either be overcome by terror, or relax and accept what will happen next,” she said. “Either way, it’s time to jump. It’s about taking a big leap of faith into the unknown.”

Going from a theatre major to building a church and pursuing developmental ministry, Haley has taken her own leaps, and designed her life by trust and transition. At 38 years old, she has served as the associate minister at Foothills Unitarian Church in Fort Collins, Colorado for two years and continues to do so. However, she said that ministry never really crossed her mind even though she was very much a part of the church growing up.

“I always had a strong religious orientation,” she explained. “During recess, I would spend time in church. I was raised Catholic. However, there was an absence of women in ministry; what you see can be very limiting. At any point along the way, I would have said no to ministry.”

That changed when she first attended her first Unitarian Universalist service, where the minister was a woman. Suddenly, she realized, “I am going to do that someday.” But it wasn’t until 8 years later when she sat in on a class at the Iliff School of Theology that she was really willing to make the necessary leap of faith. The experience at Iliff gave her a sense of what religious vocation could mean, and a few months later she enrolled in the Master of Divinity program. She said that she knew within her first year that she was meant to serve the church with the intent to transform the world and touch people’s hearts. She graduated in 2011.

“When I preach, I try to understand what it means to be a gathered body with, often, radically different beliefs,” she remarked. “That’s what Iliff is about. It teaches pluralism – being able to walk with each other, knowing that we hold different beliefs. That’s a core value.”

She has used these lessons in her ministry and called on them to help her church through a transitional period. The senior minister of her congregation is retiring, and the next senior minister will be determined over a two-year timeframe. In the interim, Haley will continue to minister and lead church members on their spiritual journey.

“My call is to the transition,” she added. “It’s to take a leap of faith as a called minister to pastor them through this transition. I have a sense of what it means to develop a congregation through change. Who we are now is not who we will be in five years.”

That transformation, though, is one of the things she loves most about what she does. She identifies as a revolutionary minister who loves and wants change. “It’s about respecting people enough to invite them to change, but also loving who they are now,” she said.

Even though ministry isn’t where she initially saw herself as she pursued a career in theatre, several factors along the way guided her to where she is today and have solidified her calling. These include her partner of 15 years, Carri, their two children, her family and religious background, previous career paths, and the people she has encountered through her experiences.

“Each piece is as if it was complete preparation for what I’m doing,” she remarked. “It’s as if I was always headed to here. It’s the right time and right place – it’s all a part of the leap.”

The Unitarian Universalist Association (UUA) in our region has put together a resource for Iliff students and prospective students. View it here.