“Caring for myself is not self-indulgence, it is self-preservation, and that is an act of political warfare.” 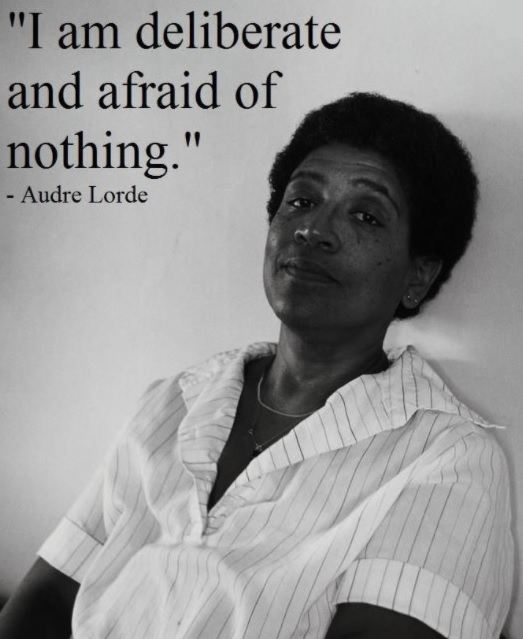 Any of us can do our own research and commit to learning about heroic Black individuals and people of Color in this Black History Month, but I what would also serve the world is to live out their values and uphold them and carry them forward.
We can read her books, Zami, A New Spelling of My Name, A Burst of Light, Sister Outsider, The Cancer Journals, Your Silence will not protect you. From these glimpses of Audre Lorde’s life we find that she embodied the values of Authenticity, Boldness, the Courage to Be and exist as is and the honoring of her voice enough to share this deep truth with the world.
A Black Woman, born in New York City and a child of Caribbean immigrants, Lorde’s values were intuitively trusted, lived and tied innately to her lived experience at the intersections of Blackness, being a woman, a self-described “lesbian, mother warrior and poet”.  I would say that her poetry and writings exposed these social loopholes and pointed to a righteousness that can come from any of us in any lived category or identity. However, what she revealed is the ease at which we can marginalize and mistreat others despite perhaps our own marginalized identities based upon our own implicit or explicit biases.
Lorde, who lived her life not just as a Black person, or a Black person descended from Immigrants, she also lived as her full self through ALL of her identities of being a woman, a lesbian, as a person with cancer and disability. Through her lived experiences woven together, her truth-telling stories and poetry drew attention to gaps in Feminism, for example, where race and gender were often not concerned. We know from Alice Walker that from Feminism came Womanism, however, a major critique of Womanism is that it also often leaves out issues related to queer women, and Black women who reside in the LGBTQ spectrum.
I share all this for us to remember that it takes a person living their ENTIRE truth with such tenacity and bravery…perhaps living as if we have nothing else to lose…Living as if our identities are not our WHOLE story, even though to some people, they unfortunately just might be. Choosing to live is a radical act. Caring for yourself and choosing yourself is a radical act. Loving yourself is radical and to love ourselves so deeply and sensually as Lorde teaches us to do is not only a balm upon our individual souls, but a pathway to a stronger relationship with the imago dei or the Divine truth and beauty within us, and thus with those who surround us. Intersectionality brings us closer to a God and the diversity of a “Kin-dom” that we reside in and wish to grow and cultivate.
Authenticity, Boldness, the Courage to Be and Exist—Honor your voice and Exist in Wholeness!
The Rev. Candise C. Woods, M.Div.
NAPAS alum

Black History Month grew out of Dr. Carter G. Woodson’s creation of Negro History Week as a time for Black children to be able to see a comprehensive representation of themselves in American History. He designed this week to celebrate all of this rich part of history as a culmination of all of the learning about this subject that had taken place throughout the year. What is the result?

The Half Has Never Been Told about so much of this part of American history. Similarly, a recognition of our history before 1619 is often not included in the American educational curriculum. While we are familiar with the names of some of the Black people who have contributed to American and World History, many, like Dorothy Vaughan, Katherine Johnson, and Mary Jackson, were “hidden figures” until the 2016 film by the same name. Even more Black people have been and continue to be invisible to us until a family member writes a book about them. (See Invisible: The Forgotten Story of the Black Woman Lawyer Who Took Down America’s Most Powerful Mobster, by Stephen L. Carter). There are numerous people who were enslaved that have been described as anonymous. Part of the work of Enslaved: Peoples of the Historical Slave Trade (Enslaved.org) is to recapture the stories and names of enslaved persons. Today, we still acknowledge and honor the remaining Anonymous as our ancestors who continue to trod the stony road with us.

Anonymous
NAPAS alum
“The works of these noted African Americans bear witness to the power of our cultures to change and transform for the greater good of all Humanity. My music matters!”
Daryl J Walker
NAPAS Community Resource Liaison
Minister of Music & Worship Park HillUMC 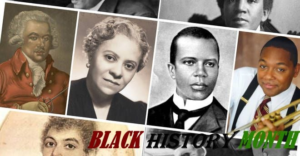 To celebrate the end of Black History Month current and alumni members of NAPAS will share highlights that speak to the occasion.
In celebration of Black History Month, NAPAS officer Daryl J. Walker shares the following post that is dear to his heart: 9 Black Composers Who Made Classical Music History.

Black lives matter. It is a fact – Black Americans have recognized this even in the face of a 400-year legacy of slavery, Jim Crow laws, history suppression and redaction, and a carceral system designed and used to diminish and destroy Black bodies.

Although “Black lives matter” has been a difficult sequence of words for some to articulate, Black people have continued to insist that this statement of fact be affirmed and most importantly, reflected in laws, policies, and everyday interactions. Most recently, after the murders of Breonna Taylor, Ahmaud Arbery, and George Floyd, the Black presidents and deans of schools and departments of theology and religion released a June 3, 2020, statement (“The Statement”) with a list of concrete demands that included:

On June 18, 2020, Asian and Asian descent presidents and deans of the Association of Theological Schools responded (including Dean Boyung Lee) with a statement of solidarity with the Black and Latin@ presidents and deans including the specific affirmation, “we say today and every day, with one voice, BLACK LIVES MATTER!” [Emphasis supplied.] On June 22, 2020, White Deans & Presidents of ATS Member Schools and Affiliates responded (including President Tom Wolfe) with a Letter of Solidarity and Accountability. This letter included the statement: “We proclaim unequivocally: Black Lives Matter and No More Stolen Black Lives!” This letter also outlined a commitment to be held accountable to anti-racist work in their respective institutions in the following specific ways: 1) following the lead of our colleagues of color in the Association of Theological Schools, pursuing in solidarity the work of racial justice; 2) decentering whiteness, unlearning white supremacy, and reimagining theological education; 3) shouldering the ongoing work of ridding our institutions of racism; and 4) confronting the damages of whiteness and dismantling its hold on our systems and structures as central to our collective work.

On June 29, 2020, Presidents of ATS schools began to answer one of the demands of the June 3, 2020 statement by engaging in a Black Lives Matter discussion during their Biennial Meeting.

The Statement calls for more urgency in the work that Iliff began with its 50in5 Initiative on May 21, 2019. In his May 29, 2020, Remembering George Floyd message President Wolfe declared “Black lives matter” and with this declaration, he and Iliff’s senior leaders know that we must daily renew our commitment to engage in policies and practices that both demolish racism and honor Black lives. This page is created to document both a beginning and a continuation of our commitment and accountability to this vital and sacred work.