Emily Flemming is many things. Bored is not one of them.

The South Carolina native noted that she has “quite a lot of balls in the air.” Not only is she a pastor at Lyons Community Church, she is a founding member of Rebuild Lyons, a board member of Lyons Community Basic Needs and Emergency Fund, a coordinating committee member for the Boulder County Long-Term Flood Recovery Group and member of the Case Management and Needs Assessment Subcommittee, a member of the Lyons Human Services Recovery Working Group, a new mom and a wife.

She is also a full-time student at Iliff School of Theology. 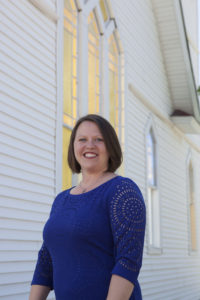 After eight years working as a corporate head hunter in Germany, Flemming made the decision to change careers. With an MBA degree and first-hand experience in the business world, Flemming “felt a call to full-time ministry,” with now being as good a time as ever.

“There’s never a good time to go back to school,” she said. “You can’t predict major life changes. I think that sometimes pathways open that seemed closed before, that seemed impossible. That’s definitely true with my journey with Iliff.”

Flemming is working toward her Master of Divinity degree and will graduate this May. She believes her background in business coupled with her work in the church gives her the necessary skills for future endeavors.

“Being a second-career pastor is really helpful,” she explained. “The business world gave me the understanding of structures and systems, which I can use for the political heart of the church and for the political business of the church. I’m an expert networker, if you will. I’ve learned how to meet someone and get to know them without small talk – I can use that to help people in need.”

So far, she has done just that.

When the great flood of Sept. 2013 swept through Colorado, destroying homes and businesses, washing away roads and creating millions of dollars in damages, Flemming set out to help those affected. Lyons, of Boulder County, was hit particularly hard, with thousands of residents displaced by high water. The Flemming family was one of them after their basement filled with over 2 feet of water.

“I’m not sure anything in your life prepares you for this kind of disaster,” she said. “We had to relocate to Estes Park for three months. We commuted five hours one-way every weekend to lead church services every Sunday.”

Although they were able to move back home toward the end of December, others weren’t so lucky.

According to an Associated Press article, they were able to distribute more than $950,000 to 290 people who submitted applications seeking help. Most weren’t notified in advance that they were selected to receive money.

“This is not what I thought my first six weeks of pastoral ministry would entail,” Flemming remarked.

She started at the Lyons Community Church as a pastor July 2013. 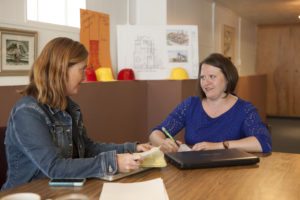 The journey to becoming a pastor for her started at an early age. Stepping into a ministry role as a woman, however, initially proved challenging as Flemming was never exposed to female pastors as a child.

“Raised as a Southern Baptist in South Carolina you didn’t see women in leadership roles (in the church),” she said. “At 11 years old, I felt a call to ministry.”

Ten months ago, she was able to make it a reality.

As graduation approaches, Flemming aspires to use her education and first-hand experiences to “be effective and make a difference.” She acknowledged that Iliff has played a role in helping her achieve her lifelong dream.

“There’s a broadness, wideness and deepness in the (Iliff) faculty, staff, curriculum and other students,” she commented. “I’ve not only been able to survive, but I’ve been able to thrive in the environment and prepare myself for pastoral ministry.”