Father Harroun Heeds Her Call to the Priesthood 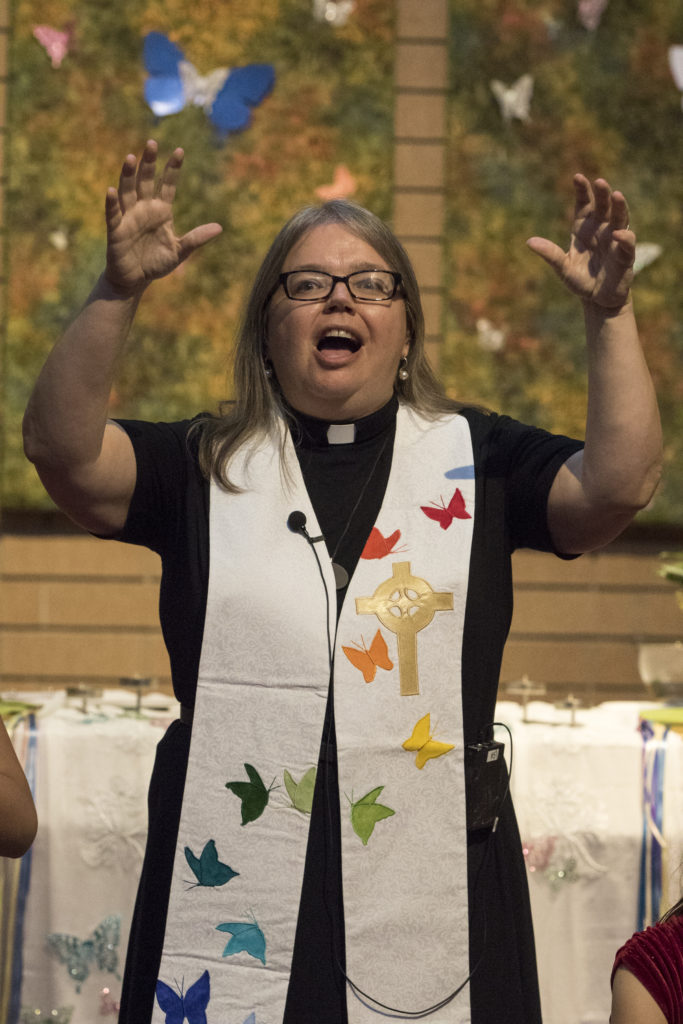 How is it that Father Teri Harroun, priest of the Light of Christ Ecumenical Catholic Community in Longmont, Colorado, is also a mother of three? Terri Shackelford Harroun, who was raised Roman Catholic, grew up with an understanding that the priesthood “was not a possibility” for her.

I earned my Bachelor of Science in Computer Science. I went to work at IBM. I was a stay-at-home mom for 13 years. I did a lot of work in my church VBS [Vacation Bible School] and Christmas Pageants.

At some point in her doing lay ministry, she felt a calling with an unclear vision.

I told my spiritual director, I feel like I am being groomed for something and I don’t know what this is. Then, later on, I was able to voice that “I think I am being called to the priesthood.”

She felt cognitive dissonance in this thought not only because she is a woman but also because she has Celiac’s disease.

I can’t have gluten. I can’t eat it. I can’t touch it. I can’t break it. So why would God call me to be a priest? In the Ecumenical Catholic Communion we have gluten-free hosts but the main bread is a wheat-based something. People won’t like to hear that Jesus could contaminate me. 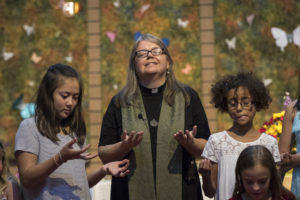 When she spoke to her spiritual director about this, she was given a spiritual practice for further discernment.

What I discovered was that Eucharist is only supposed to be part of the solution. It is not the problem.

She was then off to Iliff to answer her calling. She came to Iliff in part because it matched her ideology. At the time, Iliff did not have any online options. This meant she commuted from Longmont to Denver. How did she balance home and school life?

All of my kids were in school at that point. I loved my desk in the basement of the library. It wasn’t bad at all. My vicar lived in Aurora. Wednesday I took a night class and spent the night at their house and came back to Longmont.

One of Harroun’s most memorable courses was Hebrew Bible with Mark George.

At the end of taking his class, I asked him what book of the Hebrew Bible he would recommend I take if I was going to immerse myself in it. His recommendation? “You should figure that out and then we’ll offer it.”

At first I thought Psalms but then I decided Genesis. Everyone knew those stories but still there were questions. Why would God ask this? Why would God ask Abraham to sacrifice his son? This story is part of the Easter Vigil in Roman Catholicism every year.

Mark George offered [Genesis] the next year. There were doctoral students taking it. It was an amazing class. I carry it with me today. It was a process of deconstruction – – dumping everything out on the table and looking at the text honestly. Then, deciding what you’re going to pick back up. No apology.

Harroun describes Illif as “on a leading edge.” 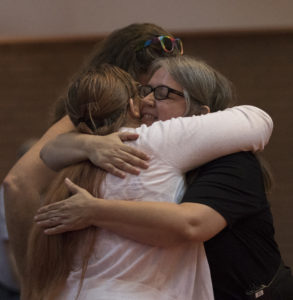 We surround ourselves with likeminded folk. Those of us who are drawn to Iliff are liberal, less literal. {We have a] narrative, experiential theology and understanding of God. Mystics and some of the prophets have had that edge.

We’re not God’s PR people. We’re not trying to be PR agents. We’re more like God’s background singers. God is the star of the show.

This year, Harroun was installed as background singer and priest of the Light of Christ Community. This community is under the authority of the Ecumenical Catholic Communion. They are ecumenical because they recognize all Christian denominations as a part of Christ’s Church and they seek inter-religious mutual understanding and cooperation through dialogue in their mission to seek peace and justice throughout the world.

We have been called to make sacramental justice known. If one parent is Buddhist, of course we will baptize their child. At every single mass we say, “all are welcome at the table.” We believe in the true presence. We believe Christ is here. If anyone is called to receive at this table, we wouldn’t turn them away.

This “all are welcome” refrain may not be an unfamiliar one to many but it is also distinct from Roman Catholicism in a variety of other significant ways. Annulments are not required. People from the LGBT community are welcomed. Clergy may be married. Power is centered in the collaboration between lay and clergy. Women may be ordained. All of these distinctions were pivotal to Harroun being able to authentically live into her calling.

The insights Harroun brings to her homilies challenge, inform, and inspire her community’s notions of sacramental justice.

God is always spoken of in king images, queen images and of course there is the prince. I have two girls and a boy. I needed am image of God related to my own girls. How was I going to help them find that image of God in themselves?

Special thanks to Caran Ware Joseph for this story.