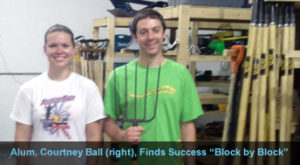 “I knew I wanted to be in ministry, but I didn’t know what it would look like for me,” said Courtney Ball. Fast forward with LOTS of water under (and over) the bridge, Ball spoke about his journey since graduating from Iliff (MDiv, ’04).

Courtney Ball, along with his young family (wife, Emmylou Ball, and two daughters), was first appointed associate pastor to a large, downtown church next to the campus of the University of Iowa in Iowa City. It was an appointment to a community where he received his undergraduate degree in religious studies and within 30 miles of his brother, Clint Twedt-Ball, a church pastor in Cedar Rapids. There was a bit of familiarity and a nearby family support system, but he soon yearned to be in a more innovative ministry. About a year and a half into Courtney’s appointment, Twedt-Ball was involved in a local United Methodist task force looking to establish an outreach ministry in a depressed urban neighborhood in southwest Cedar Rapids. Twedt-Ball asked his brother if he would like to help him get it started. Ball welcomed the opportunity to work with his brother, whom he describes as a creative, visionary person, who builds relationships and community easily. 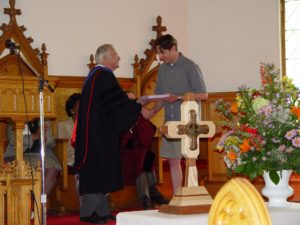 While a key administrator of the local UM conference was encouraging about the new ministry, the annual conference declined financial support. In spite of this, Ball and his family took a risk and moved to a small house in northwest Cedar Rapids, found a temporary job, and with the help of his brother and other ministers, started reaching out to their neighbors.

In 2007, after a year of working and raising funds, the brothers were made co-executive directors of a new non-profit, Matthew 25 Ministry Hub, with a small board of support representing several area churches. By assessing immediate needs of the community, the ministry began to creatively offer services such as tutoring – to insure kids’ future success (particularly reading), tax preparation for the poor, lunches for kids during the summer, clothes, Christmas gifts, local foods and anything that could be creatively provided. The community started to welcome them in.

Then, a flood hit in 2008 and essentially wiped out the area. Courtney and his family were displaced for four months and lived with his brother.

While disaster recovery led by UM Committee on Relief (UMCOR), FEMA, and the Red Cross had great response, they did not have the listening presence that the Matthew 25 Ministry had established. The relief efforts were quickly departmentalized between agencies, and Matthew 25 became the communications arm.

Supplied with baked cookies from local churches, the brothers, along with many volunteers, knocked on doors and offered the cookies to every neighbor who would talk to them in order to find out how to put lives back together. Ball was also able to form a group in a four block area around his house where neighbors could support one another through the recovery process. Agency relief efforts moved much more effectively through the trust that was built with Matthew 25 neighbors. Still, a year after the flood, people were reluctant to let others help. Neighbors wanted to take care of their own. 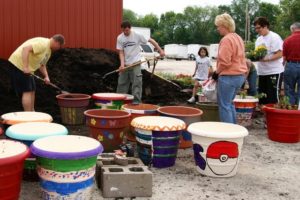 So, the idea of building community like Ball’s four block area was floated to UMs and the 4 Oaks Affordable Housing Network, a Cedar Rapids-area family service agency. The idea created Block by Block, a rehabilitation project, landing a $1 million donor (John Smith, CEO of CRST trucking firm, and his wife, Dyan), along with $750,000 from the Greater Cedar Rapids Community Foundation, $200,000 from the Iowa United Methodist Church disaster fund, and additional private and public funds, with Matthew 25 Ministry Hub as the overseer. The funding allowed them to start forming communities immediately with eight additional blocks being added in the first four months.

Matthew 25 was then able to hire others to knock on doors. Block by Block was a win-win for the community by opening doors so stories could be shared and neighbors’ relationships could become stronger. One resident said, “I used to go out the back door. Now I go out my front door and say “hello” because I know my neighbors and their stories.”

To date, Block by Block has helped rehabilitate or is rehabilitating more than 300 flood-damaged homes on 24 blocks. Matthew 25 has other new programs in place as well – Cultivate Hope (gardening and installing planters); a tool lending library (with “how-to” workshops); and Groundswell (space for youth and family activities including concerts, refreshments and interactive classes).

A statement from Matthew 25’s website helps to paint the picture of Ball’s ministry, particularly the part about empowering community: “We believe that every person and every community is gifted, even the ones some may label as needy. We aim to let this belief guide everything we do, and our treasure-hunting has been rewarded. We have made great friends and accomplished great things together.”

Ball offered some thoughts for those entering ministry. “You really need to be able to throw yourself into something with no guarantee of salary. You may need to take some risks, let go of security, and step out in faith to do what you’re called to do. At least for me, it also required learning to plan a program, develop goals, plan a budget, build a community, and get help. I had to figure it out pretty quickly.”