As described in a Denver Post story, Nadia “grew up in a fundamentalist Christian family in Colorado Springs but eventually dropped out of church for more than a decade and lived a wild life: drinking, drugs, lots of sleeping around. Eventually, she found her way to recovery and has been sober for more than two decades.”

Knowing she wanted to start a church, in 2006 Nadia began hosting a monthly Theology Pub at the Mercury Café. Sometimes it was awesome but more often than not it was awkward.

In the fall of 2007, Nadia and eight other people started meeting monthly in her living room to pray and share a meal. And in April of 2008, the House for All Sinners and Saints held their first public liturgy. They began worshiping weekly during Advent of 2008. 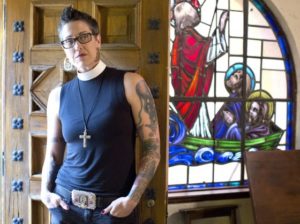 Known for her edgy style, tattoos, and two bestselling books, Nadia today is considered a rising star in the Evangelical Lutheran Church in America, one of the largest Christian denominations in the U.S.

Despite all the attention and success, her real love is preaching to the 150 people who show up every week at the clunky, gorgeous church that is the House for All Sinners and Saints.

Simply put, she loves pastoring her small church and sees herself primarily as a preacher of the Gospel.