The conference will bring together indigenous voices to discuss a way forward concerning the infamous book Iliff possessed bounded in the flayed skin of an American Indian man.

The community is invited to witness this dialogue, own its history, and learn from its errors.

Good morning and welcome to the Iliff School of Theology for the Redskin, Tanned Hide Conference.  We are grateful for the support for this conference that comes from the General Commission on Religion and Race of the United Methodist Church and the Tinker Program Endowment Fund. 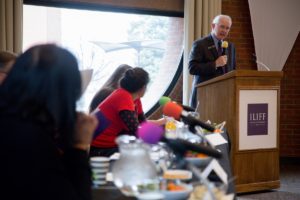 This day and this gathering are long overdue.

In 1893, Iliff School of Theology took into its library a book, given as a gift, written in Latin that is a History of Christianity.  It was covered by the skin of a murdered Indian man.  It was treasured by the institution and displayed for 80 years in a case outside of the Library.  In 1974, under pressure from students, the book was taken out of public view and in the presence of a representative of the American Indian Movement, the skin cover was removed and repatriated.  Everyone present that day were sworn to secrecy and required to sign non-disclosure agreements.

Since that time, the book without a cover has been in a safe in the library.  Over time, knowledge of the book and the secret that shrouded the cover and history, has become known.

Iliff is aware that this decision to keep this history secret has caused harm to indigenous people. I am grateful to Dr. Tink Tinker who has committed to telling the story of the book.

I first came to know of the book in 1996 at the General Conference of the United Methodist Church convened here in Denver.  I heard about it again several years later during a denominational visit to the University of Denver as the commemoration of the Sand Creek Massacre planning was beginning to take place.  When I was appointed as the president of Iliff in 2013, I knew there would be work to do related to the relationships impacted by how the school has handled the book.

To today’s panelists.  Iliff School of Theology is humbly before you.

The Iliff School of Theology comes to this day with no predetermined conclusions about the future of this book.  We do come with an openness to listen, learn, feel and become newly mindful about how Iliff’s history with this book has impacted the lives of indigenous persons.

The Iliff community seeks your consultation and wisdom as a beginning to a way forward.  Unlike in the past, Iliff is publicly asking your assistance in coming to understand the best way to own its history and determine a way to deal with the physical remains of the book.

On behalf of Iliff, I welcome you.  I thank you for your presence.  We are listening…

Conversation with the Lenape Nation

Professor Emeritus Tink Tinker (wazhazhe, Osage Nation) had an excellent meeting in Oklahoma with Mr. Curtis Zunigha, the cultural preservation director for the Delaware Nation of Oklahoma (better known by the self-appellation Lenape). “He and I are very much on the same page in our understanding of what is at stake in our Iliff conundrum over the remains of the Iliff Book. Like myself, Zunigha sees the issue around the Book presenting Iliff with a distinct teachable moment, one that we would do well to make use of for the sake of the world around us,” said Tinker. “As you have also said to me, this could be a way in which Iliff might prove to be a role model for other institutions across the American and American Indian landscape.”

Zunigha expressed a willingness to help Iliff in a variety of ways, including summoning the backing of the DNO for any reasonable resolution that have been agreed to be implemented. As noted by Tinker throughout the conversation with Zunigha – It will be quintessentially important for Iliff to be willing to put its financial resources behind any genuine remediation. 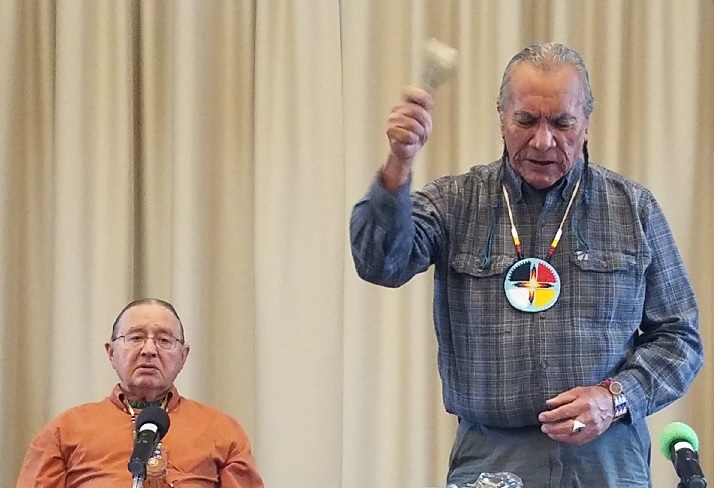 “The Redskin, Tanned Hide conference marked a good first step by Iliff in owning the history of the book that was presented as a special gift to the school by a methodist minister in 1893. Let the healing process begin.”
Professor Emeritus Tink Tinker (wazhazhe, Osage Nation)

View a slideshow of the conference. 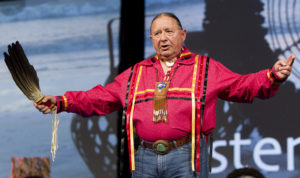 Redskin, Tanned Hide: A Book of Christian History Bound in the Flayed Skin of an American Indian: The Colonial Romance, Christian Denial and the Cleansing of a Christian School of Theology

Read Professor of Religion & Communication Jeffrey Mahan’s article – The Skin of an Indian.