Brydie Harris (MASJE ’17) was selected by Iliff’s faculty to be our 2017 Student of the Year. Brydie is a Black, non-binary, scholar, poet, and activist. While at Iliff, they served on as Co-Chair of Student Senate and engaged in LGBTQ activism. Brydie is the founder of QTPoC Colorado, a group for LGBTQIA and two-spirit people of color.

After graduating from Iliff, Brydie is pursuing a PhD in Pan-African Studies at the University of Louisville in Kentucky while doing community engagement and outreach with the Laboratory to Combat Human Trafficking. They devote their work and life to radicalizing social systems in the pursuit of love and justice, including academia, as they work toward becoming an educator. 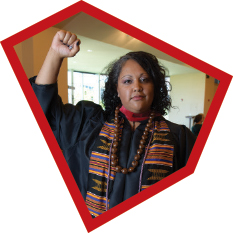 “There are few times in this life where you will be rewarded for being yourself. This is opposite from the logic that we tell children when they are coming into their own, but I have found this, unfortunately, to be true. Rather, being our truest selves often means that we are too proud, too unashamed, and too eager to be as queer, loud, unrestrained, Black, femme, (the list goes on) as our nature requires. Blackness, queerness, femme-ness, and other identities that are not white, male, cisgender, heterosexual and able-bodied, etc., are historically incongruent with academic and other social successes. Luckily for myself, I have never been interested in allowing systems of privilege to define success for me.

When I came to Iliff I carried things with me that others could not see. I carried the feeling of my grandmother’s hands, how her dark lined palms held me, frying pans, and racial injustice with the same tender resistance and fragility and how the honey sound of my name in her mouth turned to a battle cry. I carried those other black queer kids who would never grow up to walk through academy doors, but who had stories and truths to reclaim. I brought my own definitions of success, and Spirit, and faith, and love. I carried these things, and much more, and brought them with me everyday until they became evident to those around me. There was no room for failure; I had all my tools for my definition of success.

I did not learn to carry survival tools because the world is gentle and readily available to open its arms to me. I learned to carry tools of resistance and resilience because the world, including academia, has taught me to be wary of it, and the people who constitute it. I chose to attend Iliff, not because the school is a perfect place, but because they admit that it is not. Society is not just. James Baldwin said, “Not everything that is faced can be changed, but nothing can be changed until it is faced.” Admitting that there is a foundation of white supremacy, patriarchy, and heterosexism in the basement of all academic systems is the only way to decolonize them. Iliff is not afraid to name injustice even as its own scales topple and exist in imbalance as they learn how to become more just themselves.

During my time at Iliff I had many opportunities to stand up for justice. Sometimes those opportunities manifested as push back from me when I thought those at the school were not living into a mission of justice. During other times I was able to stand with those at Iliff, especially with the students, staff and faculty who belonged to or supported the Iliff Queer Coalition and the National Alliance of Pan-African Seminarians. During a morning chapel I had the honor of sharing a poem that represented my own story, but also my unapologetic support of LGBTQ ministers, including queer and transgender minsters of color. There were many members of the staff and faculty who supported me in my activism in all of its manifestations, even when that meant asking questions and standing up against internal marginalization that I, or others, felt from within the Iliff community.

This is one of the ways Iliff is different. It strives to face itself, as it must, and then change. I am grateful to have been a part of such a loving, at times frustrating, supportive, and imperfect community of people who are trying to see the truth of themselves, their theology, and others-even when it is ugly, even when it is imperfect, especially when it is cruel and needs to change. This is at the foundation of being a change agent. It does not simply mean changing the world, it also means being willing to be changed. I hope in my naming of the abundance of human capacity of resilience and bounty, but also my calling out of racism, cissexism, patriarchy, etc., that I helped bring change to Iliff during the past two years. As I move forward on my next academic adventure, I will be carrying the things I brought to Iliff, and the things I picked up from Iliff, that I have added to my arsenal of survival tools along the way.”