Sam Fisher is a third year Master of Divinity student at The Iliff School of Theology. Sam is a Nebraska native and attended Nebraska Wesleyan University where he obtained his BA in Communication Studies. While attending Wesleyan, Sam was on staff with the Nebraska Annual Conference of the United Methodist Church as the Youth Coordinator, preparing Nebraska programs to merge with Kansas East and Kansas West Annual Conferences to become the new Great Plains Annual Conference. Following graduation Sam became a Local Licensed Pastor and was appointed to Olive Crest UMC in Omaha, Nebraska where he worked on revitalization and worked closely with the community outreach daycare center. After two years in Omaha, Pastor Sam was recruited to become the Associate Pastor at Indianola First UMC in Indianola, Iowa. During Sam’s time at Indianola he was engaged in worship planning and teaching, oversaw youth ministries and with great laity guided mission and outreach ministries and pastoral and congregational care teams. Sam loves to preach and is passionate about worship design. Since moving to Denver to attend Iliff full-time residentially, Sam has loved being part of the Iliff family. Sam has worked with the Leadership Development staff at the Mountain Sky Conference Center and worked as an Intern for a new church start called Be3 Methodist Dinner Church. Sam currently works as the Director of the Newport Street Retreat Center (a ministry of Park Hill UMC), is the Pastor of Discipleship for Christ United Methodist Church, Denver, and as a Student Coordinator for Advancement at Iliff. After graduation Sam plans to continue in ministry by returning to the Iowa Annual Conference of the United Methodist Church and seeking ordination as an Elder. 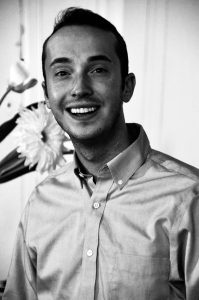