Sydney Schilling was born in Wyoming and has bright blonde hair. She’s not someone you’d expect to speak Swahili, or to have experience bringing African communities together. But, that’s exactly what she does. 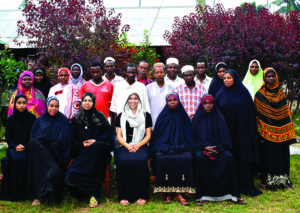 The Iliff School of Theology’s Master of Arts in Social Change [update: now called our “Masters of Arts in Social Justice and Ethics“] student just returned from her 2.5 month internship in Tanzania where she worked with the non-profit, grassroots organization, Zanzibar Legal Services Centre. Zanzibar is a semi-autonomous Tanzanian island off the mainland’s east coast in the Indian Ocean. The Centre’s primary focus is to provide free legal aid to Zanzibar citizens, as well as to host workshops around the city to combat, and bring awareness to, gender-based violence against children in collaboration with Save the Children International.

“We organized the Sheha’s, or the community leaders, to come to the workshops where we discussed the rights of the child,” Schilling explained. “It’s about creating a dialogue between community leaders. When I spoke, it was primarily of different community organizing tactics that they could use.”

According to a United Nations Population Fund article that ran in August 2014, two in five Tanzanian women 18-years-old or younger are married, and 23 percent of women 18-years-old or younger are pregnant or already have children. This can be a result of gender violence where the accuser will walk free until the woman gives birth and a DNA test can be conducted as proof. Even if the DNA test is conclusive, the police may fail to act by asking for bribes, or it may take years to go through the court system.

“We wanted people to be informed of their rights and how to move forward as a community,” Schilling said. “Often, people would get carried away talking about how corrupt the police are, and instead, we would turn the conversation around to ‘what more can we do as a community to combat this violence?’ We took the approach of addressing ‘what’s wrong’ and ‘here’s what more we can do and come together as a community to address the issue.’”

In addition to organizing workshops, Schilling also assisted the organization with their social media, photography, writing and editing reports, and forming ties with individuals in the organization to help create community collaboration.

“There was such a feeling of solidarity with the people,” she said. “It was really cool to be in an organization where I felt valued. There aren’t words to explain how I would feel after talking at a workshop and people coming up to introduce themselves and talk with me. Just sharing that connection was out of this world, especially given the fact that I am a white westerner. It was a very humbling experience to recognize my social location, and how that location connects to the colonization of Tanzania, and still be able to create meaningful relationships despite my difference.”

Schilling is in her second year at Iliff’s MASC Program [now MASJE] and is focusing on a career in community organizing. She has a bachelor of arts in sociology from Whitworth University located in Spokane, Wash. This is also where she was first introduced to the Tanzanian culture when she embarked on a four-month study abroad as an undergraduate.

“I knew from a young age that I wanted to explore more than what I grew up in,” she said. “I’m interested in learning about people who are different from me, and what they have to offer and teach me.”

In setting out to learn from others in Zanzibar, she faced a few challenges adapting to a community that is approximately 98 percent Muslim during the month of Ramadan.

“It a culture shock, it will always be a culture shock,” she said. “Everything is so different from what you’re used to. I knew that working in an organization within Muslim culture, I wanted to show respect by dressing appropriately and meeting the people at their level. As a woman, I had to wear a headscarf and be almost completely covered.”

She notes that the difficulties she faced allowed her to have more faith and trust in herself, as well as acknowledging her capabilities to get the most out of her experience.

From her immersion in Tanzania, she brings back perspective, experience and knowledge. At Iliff, she feels like she is able to bring up different viewpoints and relate them to her past experiences and future goals.

“I went to college at a religious, conservative, undergraduate institution and always felt like the odd one out. I have radical viewpoints, and not everyone is in agreement or understands me. Iliff is a place where I feel right at home. It’s a place where I can share my ideas and who I really am.”

After she graduates from Iliff, Schilling sees herself back in Tanzania using the model of her internship as a way to work within existing communities to promote change.

“My plan is to go in without an agenda,” she explained. “I need to just exist there before I’m able to work with them to help provide the change they want in their communities. I know that community organizing and relationships are possible, because I’ve developed those connections with individuals in Zanzibar.”

Save the Children International

Master of Arts in Social Justice and Ethics