Ted Vial: How Our World was made in Jewish Women’s Salons

Home » Iliff Stories » Ted Vial: How Our World was made in Jewish Women’s Salons 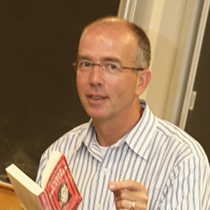 Ted Vial has been searching for a way to tell the story of the birth of the modern world in a new way that includes some fascinating women. “Basically, a lot of the ideas that we take for granted in modernity by famous people like Schleiermacher and Hegel were worked out in part in salons (they started as kind of book groups) in Germany in the early 19th century. There are several famous salons, and it turns out that all of them were hosted by Jewish women. So that’s fascinating.” The problem is that these women’s stories are left out of the full story of the development of the modern world that we live in. “There’s not so much written about these women, and they left behind letters, diaries, and novels, not books of philosophy. But they all left observant  Judaism behind, left behind traditional arranged marriages, and forged careers at great personal risk.”

Things we take for granted like “love” were not acceptable reasons to get married in these women’s world, but they did it anyway. Loving long-term, relationships are important to us, but the search for it by women like Dorothea Schlegel made her “weird” to her contemporaries. There’s a religious story at work here, too. Reform Judaism is just coming into being— These women were raised in Orthodox Judaism, but don’t really fit there. Through their lives are trying to form a new sort of religiosity, one that looks familiar to Jews and Christians in our world. What we think of as Judaism doesn’t exist yet but is taking shape right at this time. Modern love and modern religion are all taking shape right in the salons of these important women. Vial wants to know what changed to make our world “modern” and is using courses for several different communities to help him work on this story.

“My current research is on the modern construction of gender, religion, and Judaism. I’m teaching a course at CU Boulder this fall, and will teach one at Iliff this winter.” (It’s called Judaism, Gender, and Religion in case you want to check it out!)

In addition, the last 3 Sundays in October he taught a series at St. Andrew (UMC) on this. He’s also working on a winter course at DU’s University College. Talking to all these laypeople just outside of his own research area means he has to translate his information and find the parts that people are interested in hearing about. His goal is to write a book engaging to non-academics. Students so far are attracted to the daring and even dastardly things these women got up to! “People love stories,” Vial says.  With such a wonderful cast of characters to follow, the turning points of history are exciting to track.

You can also watch Dr. Vial talk about this in his Installation address below: Salon Jewesses and the Religion of Love