“In the 22 years I’ve been teaching and writing about religion, I feel like I know a great deal less about the topic than when I started,” he said.

Kinnard, a professor of comparative religions at The Iliff School of Theology, discussed the definition of religion and non-religion during a University of Denver’s Osher Lifelong Learning Institute (OLLI) lecture. OLLI is an adult learning membership program designed for people age 50 and older.

“Religion does so many other things besides give you faith in a divine being,” Kinnard said. “It provides structure, friends, moral compass. Religion still has that profound binding effect.”

Throughout history, religion has been defined by scholars, scientists and common people in a variety of ways, including as a phase that would eventually fizzle out and be overshadowed by science or hard facts. From myths to relics, religion can be dissected down to its roots and still maintain an aura of mystique, create confrontation and provide resolution.

Is attempting to define it, however, beneficial?

“I think it is useful to define religion,” Kinnard said. “Religion is plural, not singular. It can definitely help us see things that we wouldn’t necessarily have seen; it provides different ways to emphasize different things depending on the definition. It’s not so much about the institution, but about the experience of what you’re encountering.”

Kinnard created his own definition of religion that transcends faiths, ways of living, creeds that worship a deity and ones that don’t.

According to Kinnard, religion is:

A discourse that transcends the human
Practices based on that discourse;
A community centered on those practices and that discourse; and
An institution that regulates, protects and maintains – and is constituted by – the other three
“We want the ability to have scripture pieces, rituals and the communal function of religion; religion creates communities and institutions,” he commented. “Based on this definition, you could make golf a religion if you want, minus the first point.”
Although he brings humor to the subject, he also emphasizes that what one person perceives as their religion may be considered non-religious by the person next to them.

“It’s easy in some ways to create a narrow definition,” he added. “But, it’s a false dichotomy. There’s no real clear line between the religious and non-religious. It may instead be more beneficial to think about them in the same kind of continuum, instead of separately.”

Relating to this is the idea of religious pilgrimages to sacred and non-sacred places. Kinnard touched on the notion that people go to places that are sacred for some people, but they don’t necessarily go for sacred reasons. He stated that the difference between a tourist and a pilgrim, and between a sacred place and a ‘fake’ place, is not as black and white as it may seem. 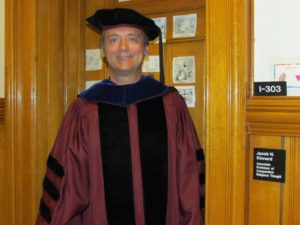 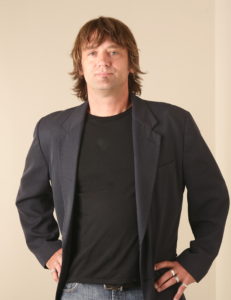 People travel from all over the world to go to Las Vegas, or to an auto show, or to a sporting event or to the grand opening of an iconic store. These are some of the examples he gives that attract ‘tourists.’ But, he asks, can the journey be, in fact, identified as a pilgrimage?

“These are very real places that people go to see and do certain things,” he said. “It holds meaning for them. If we think about them in the same way we think about a pilgrimage place, I think we see things about people’s behavior that makes the definition of religion a little more complicated.”

Additionally, he gives examples of people doing religious things in non-religious environments, such as praying at a craps table or using religious language on a beer pilgrimage.

“It’s an interesting kind of self-identification,” he remarked. “We move in and out of modes of religiosity throughout the day. We’re constantly moving in and out of religion – and not even always when we know it.”

Kinnard’s religious background was essentially non-existent as a child. He did not grow up in a religious household, nor did he have any interest in religious studies until college.

“My father was unapologetic Marxist,” he said. “Religion was very much something other people did. I had no real sense of how religious people were religious and why.”

Later, though, Kinnard spent many years as a practicing Buddhist, including a stint as a monk in Sri Lanka at a Buddhist temple. His vision of religion has been shaped by academia and classroom learning to travelling the world and experiencing religious practices first-hand.

“I’m still realizing that, in a sense, I expect there to be a clear line between sacred and secular because that’s what I was taught in the textbooks I read,” he said. “When I went out into religious communities, however, I found that that’s not how it is at all.”

Although he now describes himself as a ‘lapsed Buddhist,’ and a current atheist, he continues to find the conundrums of theology intellectually stimulating.

“What holds my interest is it is never dull to think about religion,” he added. “I find it fascinating and compelling in part because its messy, it’s complicated, and the lines and edges are all blurred.”