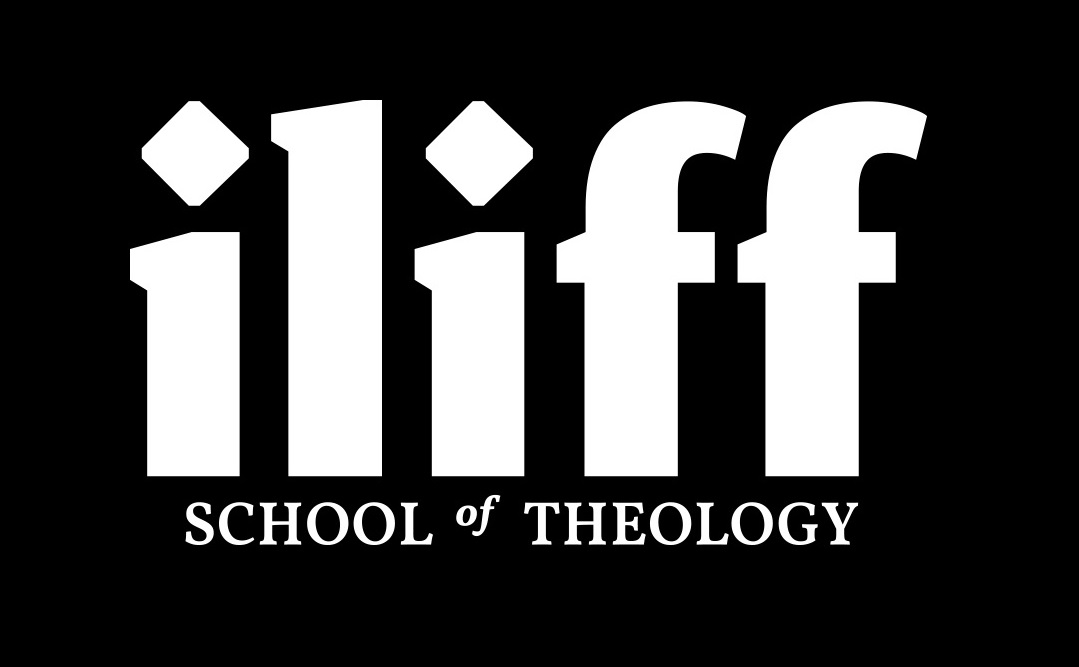 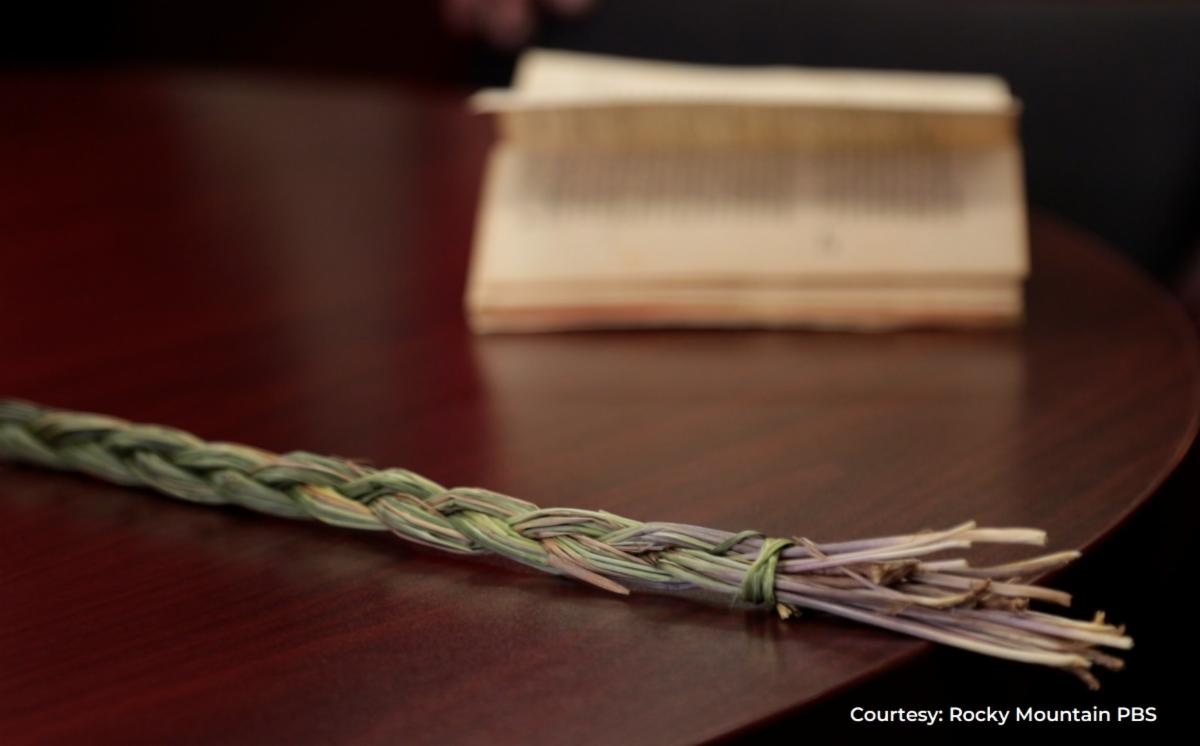 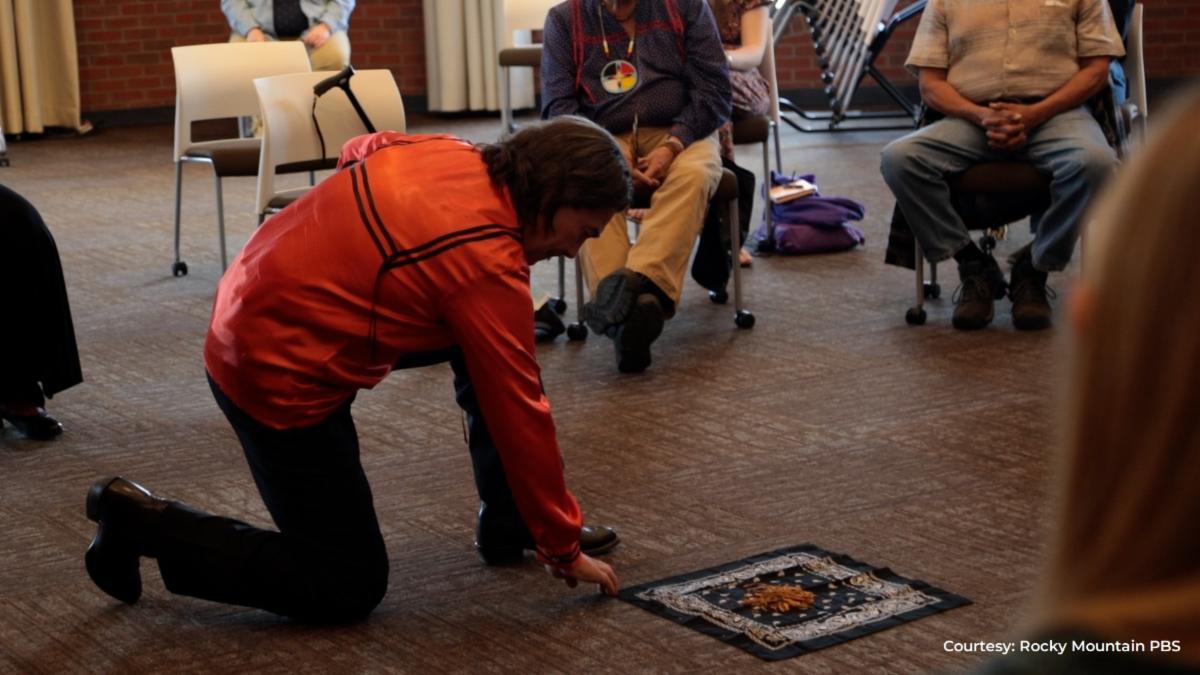 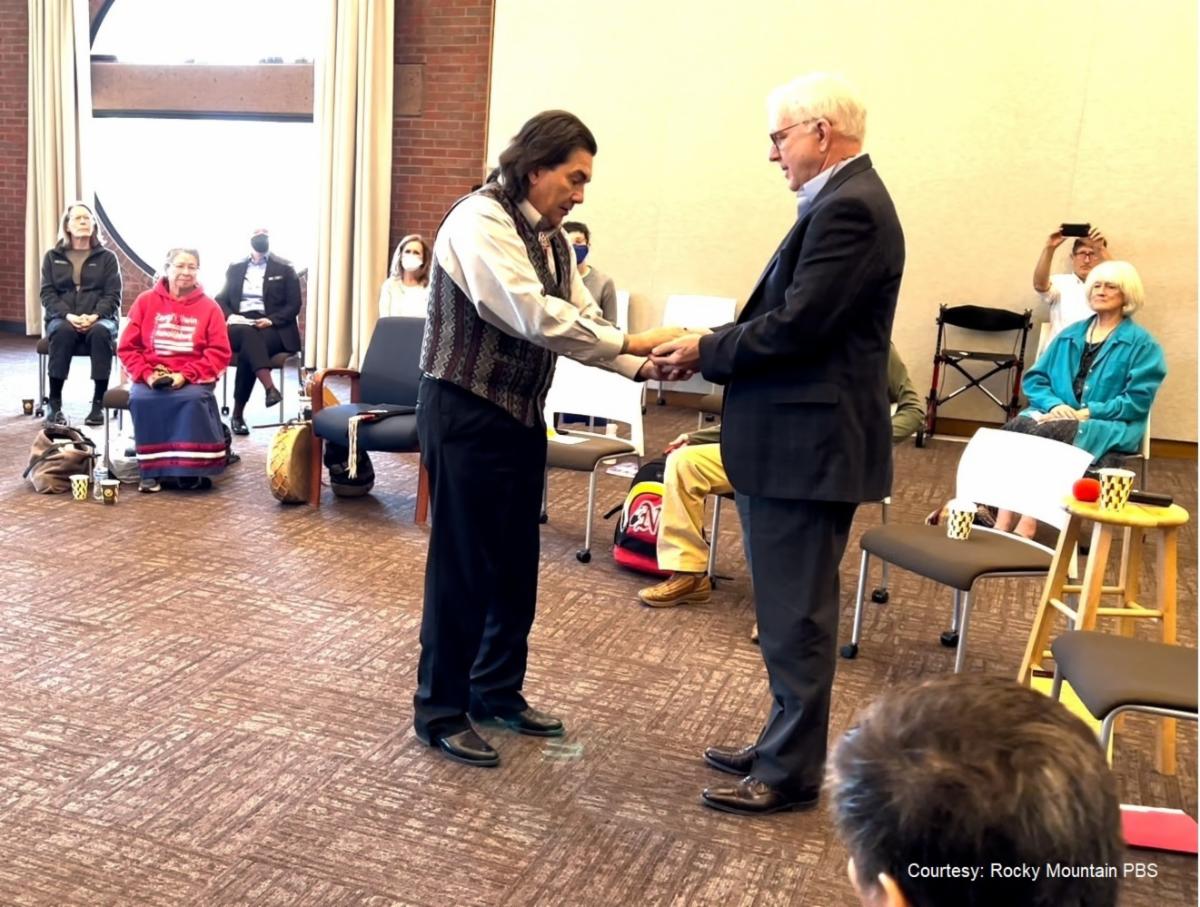 On April 29 and 30, 2022, Iliff hosted a historic and memorable gathering with a delegation of Lenape Elders on the “Iliff book” – a book written in Latin on the history of Christianity which was bounded in the flayed skin of a murdered Lenape man.

At the gathering, the Iliff community, led by Iliff President Tom Wolfe and Professor Emeritus Tink Tinker (wazhazhe, Osage), listened and discussed the intertwined histories of Indigenous Peoples and the Methodist church.

During the two-day meeting, Lenape elders shared reflections on the long history of American Indian genocide, the euro-christian violence, the occupancy of Indian lands, and Iliff’s involvement in the “horrendous relic of colonial conquest and White supremacy.”

Below is a reflection of the historic and memorable gathering by Professor Emeritus Tinker and Dr. Loring Abeyta, John Wesley Iliff Senior Adjunct in Religion and Society:

One year after its establishment as a distinctively liberal and progressive Methodist theological school in the Rocky Mountain region, board members of the University of Denver, which then housed the Iliff School of Theology, accepted a gift to Iliff from Methodist minister R.M. Barns that would embed itself into the school’s identity in ways unforeseen by those who accepted the gift on September 26, 1893. This gift, which was described in a 1934 Rocky Mountain News article as “priceless vestment for the teachings of brotherly love” and in a 2015 published history as a “gruesome trophy,” is today at the center of Iliff’s re-envisioning of its mission and the institution’s commitment to social justice.

For more than eighty years, Iliff had maintained a perversely proud display of this 1893 gift, an old book of christian history horrifically bound in the tanned skin of an American Indian murder victim. Under the incisive leadership of President Tom Wolfe, along with American Indian emeritus professor Tink Tinker, Iliff has now agreed to a radical course of action to rectify what had been made so egregiously wrong.

Back in its second year of existence, Iliff had accepted this macabre gift, a trophy of the eurochristian conquest of American Indian Peoples. Two Lenape men had been murdered by a White squatter farmer for the crime of walking across what he considered his own property. His squatter colleagues then skinned both victims and turned their tanned skin into knickknacks, including the cover of this book. Iliff kept its grisly treasure on public display for 81 years in the entrance of its library until challenged by several Iliff students and the American Indian Movement (AIM) in 1974. To diffuse the controversy, Iliff secretly severed the cover from the book and surrendered the human remains to AIM and then hid the remainder of the book in the bowels of Taylor Library, constraining all participants to a non-disclosure agreement. The questions that long survived this incident were 1) why maintain the secrecy of Iliff’s reprehensible behavior, and 2) what should be done with the remainder of the book? Early in his tenure as president, President Wolfe decided that the narrative of the book’s history should become a teaching moment for both Iliff and the rest of the world. What Iliff once displayed with perverse pride, and then hid away with equally abject shame, Iliff now intends to use transparently as a teaching tool and as an occasion for reshaping its whole theological presence in the world. And they intend it as a moment for building right relationships with American Indian Peoples, particularly with the Lenape.

To help Iliff sort out its course of action, Iliff invited a delegation of Lenape elders to consult with Iliff in April 2022 and negotiate a path towards making right what had been so awfully wrong. Professor Tinker, with the blessings of President Wolfe, had already broken the non-disclosure agreement by publishing two articles about the book and its history. For his part, President Wolfe had pledged a future of transparency regarding this history.

This conference was the fourth in a series of events planned by President Wolfe and Professor Tinker intended to address this ongoing concern about the book. In 2018 Iliff’s Native American Justice Council hosted the initial conference on the so-called 1493 “doctrine of discovery,” or as scholar Steven Newcomb prefers to call it, the doctrine of christian discovery and domination. This doctrine of discovery was a legal document enacted by a catholic pope summarily giving the Americas, Indian Country, to Spain.

In March 2019, Iliff hosted an all-day conference focused exclusively on the Iliff book inviting a panel of local American Indian community speakers to address the school audience: “Redskin, Tanned Hide: A Book of Christian History Bound in the Flayed Skin of an American Indian, a Native Forum.” It was during this conference that the seed was planted for calling in a delegation of Lenape elders to consult with Iliff, since by then it was clear that the murder victims in 1779 were Lenape men. That October in honor of Professor Tinker’s retirement, Iliff invited five important Indigenous scholars to deliver key addresses in another day-long conference, titled: “Erasing American Indian Genocide: Romanticizing the American Past.” Professor Tinker’s opening remarks directed the audience’s attention once again to the genocidal impact of the now infamous Iliff book: “How an Indian’s Tanned Hide Exposes the American Myth.”

Then after a pandemic respite of two years, Iliff did finally engage this Lenape delegation. By the end of our April 2022 conference, this delegation of Lenape elders committed themselves to an ongoing relationship with Iliff and Iliff with the Lenape, and Iliff is currently making plans to reassemble with the elders in the near future. For this conference five Lenape elders from the U.S. and Canadian Lenape communities traveled to Iliff to spend three spring days in intense conversation with the school.

The elders were clear that Iliff needs to engage in ongoing demonstrable and consequential action to begin to build right relationships with the Lenape People and American Indians generally. On the second day the Lenape elders presented Iliff with the explicit list of necessary steps, quoted below. These will require Iliff’s close attention and dedicated effort enduring beyond any one school administration or president. Moreover, they will require persistent, long-term funding that will significantly re-shape Iliff’s relationship with Native peoples of this Land.

Here is what the Lenape elders said to Iliff:

As the Delegation of Lenape Elders, we are calling on the Iliff School of Theology to develop funds and resources to accomplish the following:

Iliff’s current senior leadership swiftly responded with overwhelming affirmation of the Lenape requests. Both the members of the Board of Trustees in attendance and President Wolfe voiced their unconditional agreement. President Wolfe used these words about maintaining a permanent relationship with the Lenape elders:

263 years ago, the murder of two Lenape men was one incident among a multitude of such violent actions as the juggernaut of eurochristian conquest plowed its way across the continent. These murders of the Lenape escalated the attempted elimination of Native peoples from the continent and fractured indigenous nations and communities. The literal separation of skin from one of the Lenape victims, all in the service of glorifying the history of christianity, was emblematic of all the separations that Native peoples experienced during domination and conquest, colonization, extermination, removal, and assimilation at the hands of eurochristian invaders. By the time this book on the history of christianity, bound in the skin of the murdered Lenape man, reached the hands of Iliff’s board of trustees in 1893, the genocidal damage to Native peoples was extreme. And yet, Native nations, communities, and peoples have survived. Among them are the Lenape elders who are from the same Lenape nation as the man whose skin covered the book that Iliff still houses in its archives. Those Lenape came to Iliff in April 2022 to hold Iliff accountable and find a way forward together with the Iliff community.

Iliff stands at a crossroads where its next steps in relation to this book could speak clearly, loudly, and persuasively to the rest of the world about how to rectify the harms of generations of eurochristian conquest on this continent. So Iliff begins a new journey to establish a very different relationship with Indian Peoples and with the Lenape in particular. For some decades many Indian people would refuse to enter Iliff because of this egregious book and its history. But that history is part and parcel of the history of this country. Now Iliff is proactively committed to changing that historical memory. And as we have said consistently, healing for Iliff is a process in which all of us help to ensure that Iliff will never forget its role in this gruesome history. We call on the whole of the Iliff constituency to stand with Iliff in this historic endeavor. This will necessarily command our intention for years to come.

To watch the full length of the documentary, please click here. 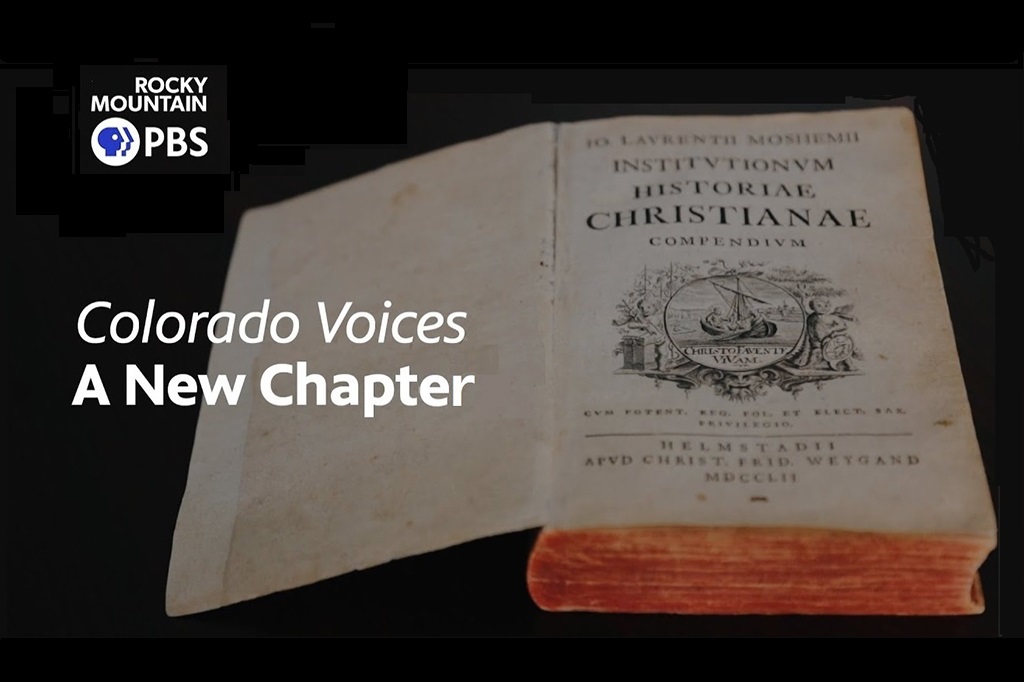 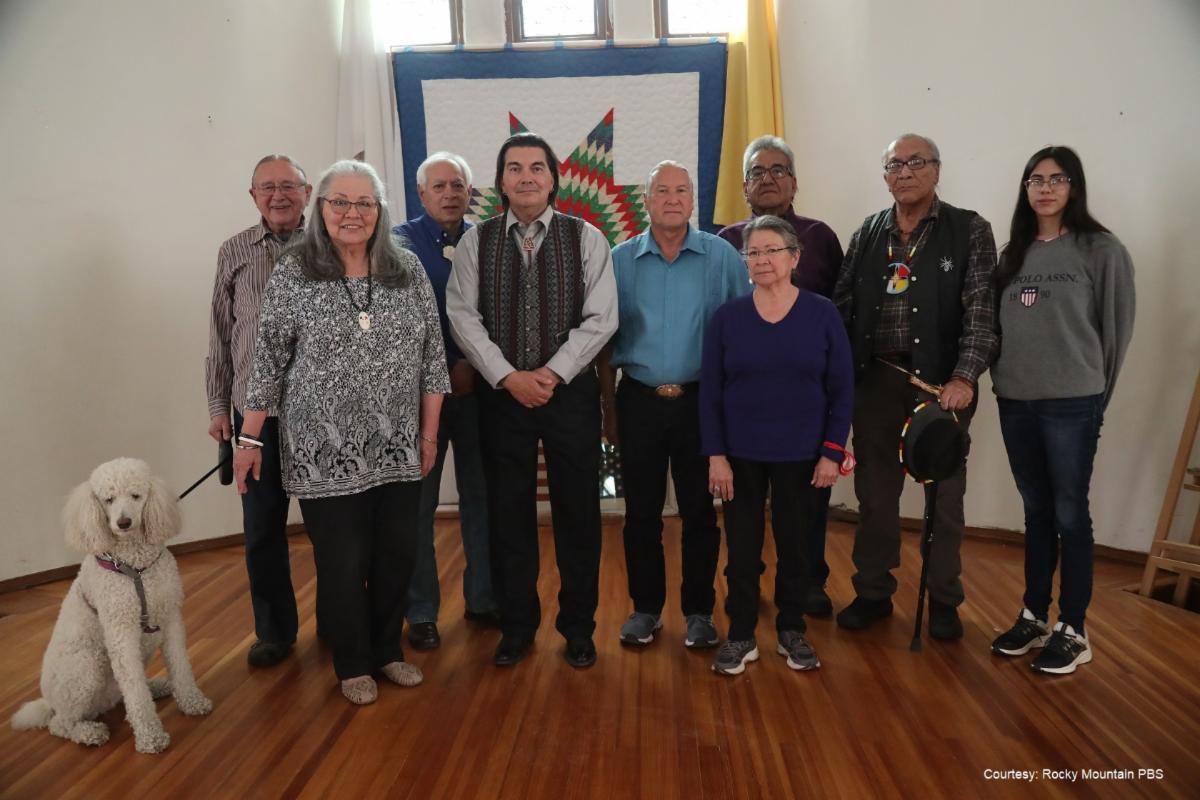