Handing Out the Love by Alum Rev. Jerry Herships 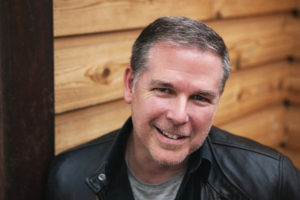 I was working on some grant paperwork this year and ended up having to add up my time spent “working with the poor and homeless.” When we crunched the numbers it came out to just over 1,000 hours. I think back to what I know now regarding the poor and food insecurity and the homeless compared to then. A few things stick out.

I never took the time to realize how good I’ve got it.

Almost within arms’ reach I have three kinds of pasta, two kinds of crackers, and at least five beverage options. I become a bit of a jerk if we run out of diet coke. We have food in the freezer because we aren’t IN THE MOOD for that food right now…so we’ll freeze it till we ARE in the mood to eat it.

I think this kind of abundance is common for many of us. We often forget, or don’t know, that 1 in 8 Coloradans live in poverty, or that 1 in 5 kids don’t know where their next meal is coming from. I don’t think it is about being self-absorbed (ok…sometimes it’s about being self-absorbed…). I think it is more the fact that there are a hundred million things to think about and two hundred million problems in the world. It can become overwhelming.

Relationship: Just do it…one day at a time

I never planned on spending 1,000 hours in the park. If that was the goal I had set, honestly, I probably would have quit. It would have been too big. I just made it a point of being with the poor and those in need every week, multiple times a week. For me, it’s a biblical imperative. Being with them changed me. They made me see need and gratitude and grace different. They LIVED it. They were getting by on very little — on average, a Coloradan gets $1.38 a meal or $4.14 a day in food stamp benefits — and many of them WERE HAPPIER THAN ME! It has been a long learned lesson, but I have watched people teach me…slowly…how to be more grateful. It is this quid pro quo that keeps our relationship with those in need healthy. We are not enabling. We are exchanging things the other needs. Desperately. Relationship is everything.

Who is the teacher and who is the student? Physician heal thy self…

We aren’t solving hunger and homelessness. 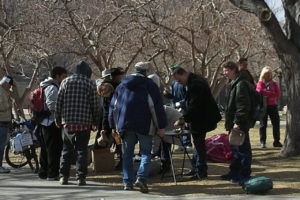 When AfterHours Denver started feeding folks in Civic Center Park eight years ago, we never, ever believed we were going to solve homelessness and hunger.

We were only going to offer love.

The PBJ, the water, the communion, the socks….those were just the tools….the channels through which we did our particular brand of rogue discipling. We believe our society has to change – that SYSTEMS have to change. Social justice work is ten times harder to do than mercy ministry. We do that, as well, and offer support; we are allies to those that focus on those fronts. But, I will say it is almost impossible to get people to do social justice work without them having experience mercy ministry of some type. Mercy ministry is the gateway drug of social justice. It is when you see a person face-to-face and they stop being a statistic or a number on a spreadsheet that you develop the inner fire to change their lives for the better.

Whether through peanut butter and jelly or a piece of legislation.

Dante was a regular in line at Civic Center Park before he got off the street. I remember one time we had given out all the lunches and we had just a couple of granola bars left. Everyone else had gone and he was helping me pack up. I asked Dante if he wanted the granola bars, and he said sure. Then, quietly, almost under his breath, almost to himself, he said, “Wow, I can’t remember the last time I had extra food….”

We live in a country with tons, literally tons, of extra food…and millions of people who don’t have enough.

Something has to change.

Until it does, if you need me, I’ll be in Civic Center Park handing out the love.