Student Daryl Walker is Building Up a New World through Music 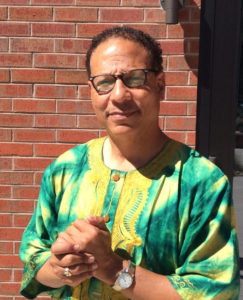 Daryl Jerome Walker, who will serve as Music Minister at the 2017 Renewal Conference, is a Master of Arts in Social Justice and Ethics student at the Iliff School of Theology. At the time of this interview, Walker had just completed a three-year contract as the Performing Director of the Spirituals Project. I asked him how he felt at the end of this journey with the renowned a cappella group.

I was honored to serve as the Performance Director and then to walk the Spirituals Project over to the Lamont School of Music.

The Lamont School of Music at the University of Denver is now the new home of the Spirituals Project.

Although Walker is no longer officially leading the Spirituals Project, as a self-described “singing-activist,” he has not taken a break from being one of Denver’s most sought after musicians. After concluding his duties with the Spirituals Project, he immediately accepted the call to be the Sacred Theologian and Music Minister for Campbell African American Episcopal Church, where the Rev. Dr. Jennifer Leath is pastor. He also continued as a co-leader of No Enemies, a local Denver group that combines social activism and music. I asked him about the mission of No Enemies.

It charges us as humanity to know my enemy and if I know my enemy there will be no enemies. We bring music to movements to help people find their voice and raise their voice for the social activism that lives inside of them.

In each of us there is something we are passionate about. We make sure we find that. There is music inside of each of us. [People] will say “I am not musical” but [they] are. Now find the activism and… these things are set.

Think of slavery and how important these… spirituals were [to activism.] The same is true with the relationship between Civil rights and music.

Walker recalled how he was nurtured in this connection between social activism and music as early as eight years old when he sang and played The Battle Hymn of the Republic.

My first public performance was in second grade. I didn’t know social activism roots were being planted. It’s a timeless piece that speaks to justice.

Walker is also in tune with feeling like a “motherless child.” His mother died when he was only four years old. 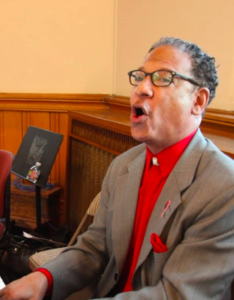 My mom had brain cancer. Prior to that, my sister had a heart deformity. She passed. I lost my sister. My mom had a miscarriage. So at age four, I didn’t have a mom, a sister or a brother. That speaks to death and how it is real and how we respond and manage it daily. Death was something I had no concept of at four-years-old but it definitely set a tone.

I have hundreds of mothers who either knew my mother or feel that there is something inside of me that hungers or thirsts for the mothering.

I of course give credit to my stepmother, Evelyn Ruth McDaniel, affectionately called “Boots.” She was a trailblazer in always teaching me to always do good for goodness sake, to be the same coming and going. She instilled in us a “tough love.” She told you what you needed to hear, not what you wanted to hear. She galvanized some traits in me that have served me well over the years. She loved me, even though there were some din our community that didn’t think she was worthy of raising a Daryl J. Walker.

Then, she passed and that was another place of learning how you manage when life happens. That has been a journey that has been meaningful but unforgettable. You always need to be in touch and grounded with our God and our Creator so that you can lean and depend on the Creator (Him, Her, the many names) I’m not going to argue with that.

The reason he entered the halls of Iliff is also the reason why he will be serving as the Minister of Music for the final worship service of Renewal.

Twenty-Five years ago, a lady– a singer in a choir– my choir– her name was Teresa– needed an accompanist to come and play for her.

I never even knew or heard about Iliff. She sang. She ministered. I put the lid on the piano. I got up. I walked out because I thought my work here at Iliff was done.

It’s so exciting. Now 25 years later, she is returning to Iliff in February 2017 to be our Jameson Jones guest preacher. Now 25 years later, I have the distinct honor to serve because I have been contracted by a place called Iliff to serve her, as she preaches, as I plan and coordinate the worship services.

(Teresa is now The Reverend Dr. Teresa Fry Brown of the Candler School of Theology and she will be the Jameson Jones preacher on the last day of  the Renewal Conference 2017.) 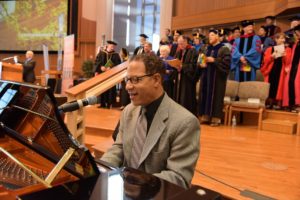 After playing for Rev. Teresa Fry Brown, what factors brought Walker back into Iliff and enabled him to stay as a student?

In 2007, Walker entered Iliff as a student but extenuating circumstances, including his father being diagnosed with terminal bladder cancer, prevented him from being able to continue. Then, he had a conversation with Associate Dean of Admissions and Student Services Vincent Tango who encouraged him to enroll again.

It made sense to allow Iliff to be a space and place for me to walk my Dad home and receive a quality education and further my calling. It is a balance that is going on that you still have to renegotiate what school is asking of me versus what my dad is asking of me. It is more than I ever thought it could be but it is working.

There is another person who had a significant influence on Walker’s return to Iliff and continued progress in training in ministry. Knowledge of Dr. Vincent Harding’s work in the Civil Rights Movement enabled Walker to discern his call.

I am being created, refined for the role of the sacred music theologian. That is a wow experience. To that end, it will embody, yes, sacred music that is influenced by spirituals.

Dr. Vincent G. Harding, who was the champion of peace, has deposited the relentless drive to work with the music but also [to determine] how the music is going to move social justice forward. That is exciting. This brings back singing activism.

It brings back the sacredness of the music that we sing. It’s not just music but it is ministry and they [music and ministry both] have the power to heal the hurt but also to convict persons that we would say could never be convicted.

One of the most defining moment in Walker’s relationship with Dr. Harding came after the death of his wife, Rosemarie Freeney Harding.

I looked at [Vincent G. Harding] from afar when his wife transitioned to join the great cloud of witnesses. He asked me to play for her memorial service at Iliff. He could have asked anyone from the nation to come in and serve. I listened and I connected in a way that was so meaningful. It was the final act of kindness that he would perform and he asked and requested my services to carry that out. You can not feel more honored to be a part of that piece of walking her home.

From there it was him speaking to me as an [Academic Advisor].
He told me, “Daryl, you don’t ask the questions of the musician.” For me, this was giving me permission to speak beyond the box of the musician. Most people would say, “You stay in the music box.”

He said “No, you are more than that. Yes. Music can frame you but it is not the beginning and end of who you are– your very essence.”

That was a place of liberation for me. Now I get that I can and that’s fine for me to be able to raise questions. If they are unsettling that is all right because someone has to agitate. Because somehow a new thought gets into the room– into the space. Then you can see that illumination will occur.